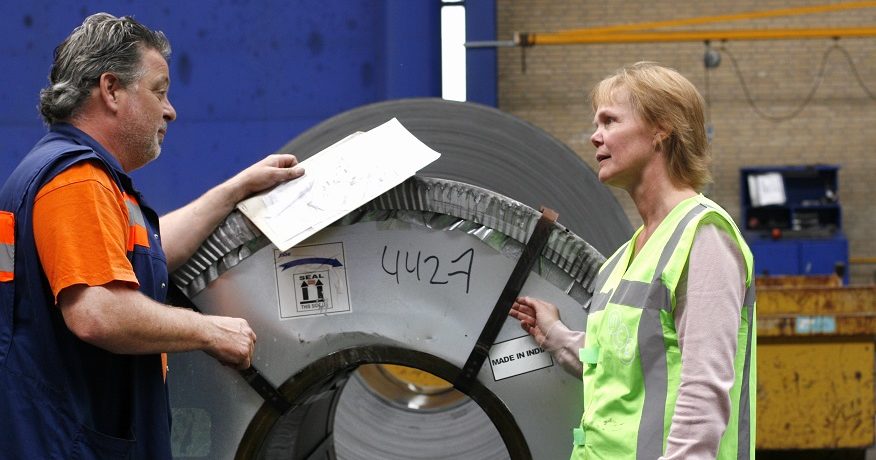 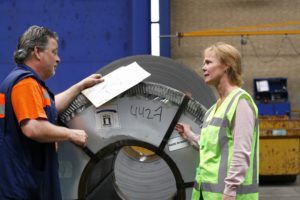 Coordinator complain management José van der Velden wanted to know how things are going with the steel coils that arrive every day at MCB.

They are carefully unpacked, weighed, stored and finally processed. “We regularly notice that something went wrong with the material during or before transport. I spent a day with my colleague Twan Janssen to see for myself what he and the other colleagues in the coil hall see. What are they all checking for? And most important for complaint management: what is or is it not manageable? It was a very interesting day.”

From her role, José knows better than anyone else that with damage, the question of blame is raised immediately: who is liable? ‘’These problems end up on our desks. It is complicated; the coils often come from far away and are on the road for months. We have to be confident that they are well packed by the supplier, for example in India or Brazil. Of course, something can happen during transportation – at sea, or rust caused from temperature differences. A ship calls at several ports along the way.”

“Especially in the cold months, moisture on the roll is no exception. Just think of shipments coming to the Netherlands through the Alps, there are a lot of temperature variations in that area. There are always various parties involved in complaints – supplier, shipping company, storage in the port, transporters – and nobody wants to pay. If the CMR document does not mention anything about damage or similar on arrival in the port, but does mention something wrong on delivery at Valkenswaard, then something went wrong during transport.”

“’CMR’ is an international consignment note that is combined with, among some other things, agreements on cargo, compensation and carrier’s liability. Therefore, it is of the utmost importance that all the damages we find are mentioned on the CMR and that photographs are taken to make the carrier or supplier responsible, for example. Submitting and handling complaints is complex and time-consuming. The colleagues in the unpacking hall can be of great help to us with the correct information, such as sending good quality pictures of the damage.”

Twan Janssen is pleased with José’s interest. “It is refreshing that colleagues from the office come here to see how things are going in practice. Processing a coil is an entire process, that must be carried out step by step. It takes time. When the roll with the magnet is on the slabs, we start checking for any packaging damage.”

“If there is visible damage, this will be indicated on the’ CMR’. We also take photos and inform the Quality Department. The coils are sometimes not immediately unpacked because of temperature differences. Then the rolls stay a while to acclimatize,” explains Twan.

“When the coil is weighed and checked with the information on the pack list, the consignment note is signed. Then the next step: unpacking. Care should be taken in this process, to avoid damage to the roller. After unpacking, sorting and cleaning up the packaging, the coil is measured: width and height. The thickness of the material is also verified. All data is listed on the coil, which waits in the storage site until it is processed on the decoiler or slitter.”