Altitude training in a robot: for progress and safety

- Home > News > Altitude training in a robot: for progress and safety 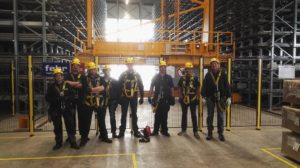 ‘’I’ve been climbing many times, even though I’m not a fan of heights. But as a chef, of course, you have to lead by example.” Gijs Notenboom is Assistant Warehouse manager at MCB. Recently, he and his colleagues had a’ high level training’ in the new robots: “We wanted to train our own people to solve minor malfunctions in the robots, because then you don’t have to call the Technical Department for a paper that is in front of the sensor. Or a bird.”

How did the training go?

“The training went well; it was a nice and interesting lesson. We first learnt the theory about climbing and then went up. It took some time to get used to it, one person has less difficulty with it than the other. But it needed to be done. We have all obtained a diploma and the training must be repeated every year. The harnesses we use when climbing, are also inspected every year. The training was given by a specialized company, Safe Site. They recently gave such training in the coil hall of MCB. The instructor Bryan is very good.’’

“We can now fix minor faults ourselves, usually a small paper for the sensor that generates a malfunction: the robot stops. Now we can remove the paper ourselves and reset the robot. How often does this happen? Sometimes never in a whole day, sometimes five times an hour. Those papers are in between the plates. We take away as much as possible during preparations, but because material slides down, there is a bit of flickering. But it can also happen that a bird flies inside. If it passes a sensor, the machine also switches off.”

Should everyone learn to climb?

“The training was voluntary, we had six places. Of course, not everyone wants to go high, I thought that as a chef I should know how to do it. Would I have participated if I was not the chef? I do not know. But the other five certainly liked it, haha.”

“We still have one harnass that we share, but in the end everyone must have their own armor. That has everything to do with safety, you will then be sure what is going on with the harness and that all the important checks have been done. Climbing is necessary with these high robots, but it has to be done safely, of course.”