Greening the fleet:”Euro 6 offers us many advantages.’’

- Home > News > Greening the fleet:”Euro 6 offers us many advantages.’’ 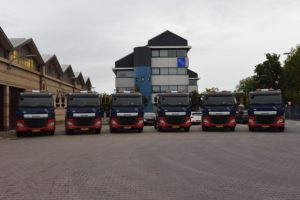 ”There are more and more cities that you cannot even drive into with a truck without a Euro 6 engine, or at least Euro 5. Even on the ‘Nieuwe Maasvlakte’ near Rotterdam, you can only drive with Euro 6, while nobody lives there! “

Tino Chel manages the MCB lorry drivers, and is active in the’ greening’ of the fleet. Meanwhile, the engines of 39 out of 64 trucks comply with the Euro 6 standard: “There is even a noise standard fixed, drivers must be able to reduce the noise with a button in the cab. For MCB that is less applicable, we drive only on weekdays and hardly ever through residential areas.”

Why are we greening the fleet?

‘’We are accelerating the process of greening the vehicle fleet, during the crisis it was interrupted. Nowadays, many companies don’t let trucks with old engines enter their companies anymore, including MCB. In our case, the health of employees also plays a role. The loading team is working between lorries all night long.’’

‘’It is also more economical, of course. We drive a Euro 6 with one liter of diesel 400 meters further, a total of four kilometers per liter. And given our fleet of vehicles, that advantage is enormous. The nice thing is also: you can see exactly how much fuel is consumed on an indicator, for some drivers it’s a sport to drive more economically. It will then become a competition.’’

Are there any other advantages of Euro 6?

‘’There are all kinds of new gadgets in the Euro 6 trucks, such as adaptive cruise control. You can compare it with self-driving cars. A lorry of course drives along with the traffic, so then it is less complicated. And not unimportant: it is safer.’’

‘’We now have 39 of 64 of our trucks on Euro 6, and in January we will have some more. If it is up to us, we will be fully on Euro 6 by mid-2019. And by that time it will also be compulsory, I suspect. Next year a new type of engine will be released at DAF, which we will receive too. This type is another 7% more economical. They are even already working on Euro 7, we will be busy for the coming years.’’