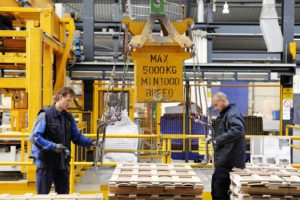 Safety expert Raymond Bekker of the CHEM Group has provided a number of training courses for the managers of MCB. Bekker considers security to be ‘his’ mission.

‘’I’ve been plant manager at DuPont for many years, so I know how important safety is. I once had to tell parents that their son would never come home again.  Well, you can imagine that the last meters to the doorbell are lead-heavy. You never forget anything like that. At such times, you realize how important safety is and what the consequences can be if someone doesn’t comply with the rules and regulations.’’

‘’I am a chemist by profession, but I went into psychology later. I wanted to know:  why do people act in a certain way, why do they take risks? How can you influence behaviour? As a company, you have a duty to make people in the workplace aware of dangers, and managers must set a good example. At MCB, I started training the top management at Valkenswaard, after which I trained all managers in Valkenswaard in three sessions. The focus was on raising awareness of their crucial role in the security process. They must be visible and not hide and allow unsafe situations to appear blindly so as not to disrupt the production process.’’

‘’Managers often consider social contacts to be more important than security, but that is the opposite world. You can drink a beer together at the canteen during the weekend, but that should never be at the expense of safety at work, because you don’t want to address someone in a correcting way. You often encounter this mentality.’’

‘’At MCB, managers must now take the step from realizing that safety is important to consistent and rigorous action. That is the most difficult phase. They must therefore also accept and appreciate if an employee refuses to do something for safety reasons. The management also demands: if the circumstances are not safe, stop!

It is well known that about 20% of all employees knowingly take risks. They do not want to disrupt production, preferably not working overtime and going home on time. MCB can take the next step if all managers are aware of their task and act accordingly. Only then will it make sense to go down to the shop floor. I hope that we will be able to make a start this year, because the number of accidents involving absence from work will not decrease, while I know that the management is doing everything possible to achieve this.’’

Impact can be large

‘’My mom always said, ‘It’s better to lose a few moments in life than to lose life in a few moments,” she spoke these words after a serious industrial accident of my father. He worked at the chemical company ICI. Because of his years of rehabilitation, he had to miss part of my early childhood and that of my younger brother and sister. And so we missed him! My mother’s anxiety has crept in with a phobia. If someone came home too late, she immediately thought that an accident had happened. This is how large the impact of a (company) accident can be. I try to convince others with my personal experiences that you can never be careful enough ‘!”